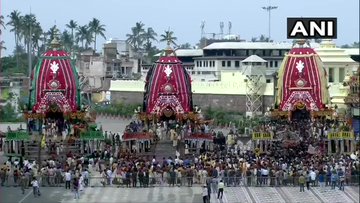 The idol of Lord Balabhadra has been brought to the chariot by priests and ‘sevayats’ for the Rath Yatra from Jagannath Temple in Puri.

The Apex Court has permitted the state to hold the festival with restrictions in the wake of Covid-19 pandemic. As per the order, it has allowed only 500 people to pull the chariots.

According to the police, an Additional Director General of Police is supervising the arrangements for the yatra. The pulling of every chariot is being supervised by a senior officer.

“We have done good arrangement for Rath Yatra after Supreme Court has found a midway to perform the Yatra here where the devotees can attend it from their houses, over the televisions and their smartphone. It is the safest way to be a part of the Rath Yatra from a remote area,” said a police officer.

The district administration has also ensured following all health guidelines in the wake of COVID-19. “We will be ensuring that the participants are wearing masks and are following social distancing norms,” said Balwant Singh, District Magistrate of Puri.

The Supreme Court on Monday modified its earlier order and allowed the annual Jagannath Rath Yatra in Odisha’s Puri to be held with the coordination of the Temple committee, State and Central government without compromising with the health issue pertaining to COVID-19.

Apex had earlier stayed the annual Rath Yatra at Jagannath Temple in Puri, which is slated to be held on June 23, and all activities related to the gathering in view of the coronavirus pandemic this year.

The festival marks the annual journey of the three deities — Lord Jagannath, his brother Balabhadra and sister Subhadra — from the 12th century Jagannath temple to the Gundicha temple. The festival ends after nine days when the deities make their way back to the Jagannath temple.